There are many important monasteries all around the island of Andros. Very important is the Monastery of Agia Marina in the village of Apikia. Founded in 1325 AD, this monastery suffered in the Medieval Ages by pirate invasions. It was also destroyed in 1833, when king Otto of Greece ordered to close down all the monasteries. Eventually, the Monastery of Agia Marina was restored in 1975 and hosts a miracle-working icon. 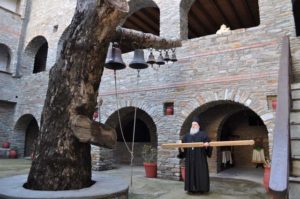 Close to the village of Apikia, there is also the Monastery of Agios Nikolaos, founded in the 16th century. Above the village of Batsi, there is the Monastery of Zoodochos Pighi, the largest monastery on the island, that hosts icons of the 14th and 16th century. This monastery also has a rich library with rare books and manuscripts. It celebrates the first Friday after Easter.

Another interesting monastery in Andros is the Monastery of Virgin Mary Panachrantos, at an altitude of 230 m. Founded in 961 AD by the Byzantine Emperor Nikiforos Fokas, this monastery hosts a miracle-working icon of Virgin Mary painted by Saint Luke the Evangelist and the skull of Saint Panteleimon. It celebrates twice a year, on July 27th and August 15th.